skip to main | skip to sidebar

We have found Paradise...

We came to this island planning on staying 1 night...but we´re on our 4th night and just can´t leave. This is really our favorite place we have ever been. Words can´t describe how much we love it...but I´ll try. We are staying at a place for 5$ per person a night. It´s a wooden house on stilts over the Carribbean Ocean with a dock that extends out with 6 hammocks under a thatched roof. We have been staying with the same french couple, two french guys and a couple from Spain. The French guys are so cool, we´ve made great friends with them and lucky for me they speak a little English. They just work every winter at ski shops in Switzerland to make enough money to travel the world from May to October. The couple from Spain seems really cool, but you´d have to ask Tyler becuase they don´t speak English. But I know that they just bought some property in Costa Rica to build a hostel, so that seems pretty cool.

It´s been interesting becuase the conversation has turned to more French so Tyler has had a taste of my world. Back to this awesome island. There are no cars or roads here. The side we are staying on has no waves so to get to the waves you have to hike through the thick jungle for a mile to the other side of the island. The trail is very muddy and it´s like walking through the the movie ¨Arachnophobia¨. I have never seen such psycho spiders. They are called Golden Web spiders and they are huge...they just line the trail on webs all over in the trees. A guy told us that they webs are really strong and they are researching making bullet proof vests out of them. I just touched it once and you can bounce it and it won´t break...but that was too close for me. I keep thinking of Nanette trying to get through this...it really is scary, but worth it becuase it´s the only access to the beach so it´s very secluded. The waves are perfect here. We have been the only tourists out surfing with a group of 5 local kids...I´m not sure how much they appreciate us being there but they are fairly nice.

We can live for about 20$ a day here. One of the French guys is a chef so he cooks at night and we all just pitch in, it´s awesome. Every night we talk about leaving we just say we can decide the next morning, but it doesn´t look like we´ll be leaving any time soon.

Posted by Tyler and Emily at 3:05 PM 7 comments

We are in this internet cafe tonight trying to decide where to go next from Panama. We are debating between a serious adventure or a relaxing time. We`ve heard that el salvador is a beautiful place with good surfing and not as touristy as Costa Rica. But to get there would mean taking a 48 hour bus ride through Nicaragua and Honduras to get there. I really don´t know if I could handle that. Or we could go to a few different towns in Costa Rica and not spend all the time traveling. It`s funny, at different times, we`re both talking each other into one or the other, but we never seem to agree on the same destination at the same time.

We`ve been traveling with a really cool couple from France. It has been such a great (and very interesting) expeience for me. Their names are Nico and Charlotte and they are fluent in French and Spanish....so that doesn´t leave alot for me to talk about with them. So for the past few days, all the conversation has been in Spanish, I have gotten better at catching bits and pieces of the conversation and try to pipe in once in a while with a laugh or a `yo tambien` (me too). Ty has been trying to give me a crash course in Spanish so I can feel more included, but to not much avail. He is very good at translating for me and it has been really fun. They are so laid back and fun to travel with.

Today we took a boat tour around some different islands in Panama. It is fun to be on the Caribbean side, it is so beautiful here. The water is so clear! We went snorkeling today and saw so many colorful fish, I felt like I was in Finding Nemo. It was a little scary becuase there were alot of jelly fish in the water, but no stings so that was good! And we saw alot of fish that looked like baby sword fishes, but the craziest thing was we saw a 4 foot long barracuda! I saw it when we were about 10 feet away and just grabbed on to Ty and we swam back as fast as we could. It had some serious teeth showing, I got out of the water as fast as I could. I was pretty spooked and didn´t get in the water again. But we took a picture of the barracuda from a boat dock nearby so hopefully it turns out. I wish I could post some pictures. Tomorrow morning we are going to go stay on a different island called Bastimentos. The song 'Ooooh Barracuda' was in my head all afternoon.

The food in Panama hasn´t been much to write home about. We ordered a 'Carribean Special' for dinner tonight and it was just a few pieces of meat and beans and rice that tasted like they were made last week. But we did find a cool Indian resturaunt last night. The Island we are going to tomorrow only has 6 places to stay, 5 resturaunts and no grocery stores...so we're going to stock up on food right now!

Posted by Tyler and Emily at 6:37 PM 4 comments

Well, we´re on our way to cross the border over to Panama. We ´ve always said that we´re going to win the Amazing Race one day, but this week we met our biggest competition. They are an awesome couple from Canada named Scott and Candy. They are the coolest, most hard core people we´ve ever met and an inspiration to us. They DROVE all the way here from Canada, just camping and winging it along the way. We got to hang out and surf with them a little bit and join in on a small fraction of the road trip. They just dropped us off in a hostel in San Jose. I don´t think anyone but those 2 could have found it for us. It was so nice of them. Good luck to you guys in the journey back home!

The hostel we´re staying is huge and actually pretty nice- but I´m glad to only be staying here one night. I just don´t think I´m tough enough to stay at a place where you share a bathroom and kitchen with a hundred strangers. It´s raining like crazy this afternoon, but luckily this place has free internet so I´m happy to be able to check in on all the sweet blogs I´m used to stalking every day. Keep the blogging alive people! I love it.

We´re heading to a town called Bocas del Toro in Panama, , we don´t have any info about it other than word of mouth from other backbackers here, but it sounds like an amazing place. I´m dreading the bus journey to get there, but it sounds like it will be worth it. I have a killer cold right now, so I´m hoping I can just sleep as much of the ride as I can. I was just telling Ty earlier this week that I haven´t been sick for a long time and that his immune system must be weaker than mine- and here I am sick as a dog- Karma got me.

We have made our final arrangements for London, we leave the 17th of October, we are excited for that new adventure! We love and miss you all!

Posted by Tyler and Emily at 3:33 PM 4 comments

After a long day of traveling we made it to Costa Rica last night. We took a bus from San Jose to a town called Jaco. It is so beautiful here. The day before we got here this town was evacuating becuase of a Tsunami warning caused by the earthquake in Peru. People in the hostel we're staying at said people just let there horses and animals run free an that when the warning was announced people started running for higher ground! But there was no tsunami and the warning has been cancelled so that is great news for us. We went surfing really early this morning and had alot of fun. The waves here are perfect and the water is 80 degrees! I'm so grateful that Ty speaks spanish, it is so nice. Unfortunately all I can do is say "hola" and "gracias" an just smile and nod while he talks to people. We love and miss you all.

Posted by Tyler and Emily at 8:56 AM 2 comments 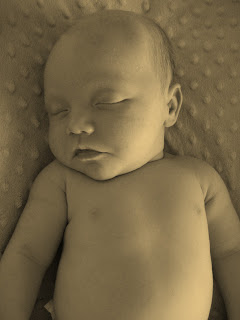 Heidi, Matt and Owen have been visiting for the last 2 weeks. It has been so fun to have them home. They are such amazing parents. Owen is such a perfect baby and quite the cuddler. He is so fun to have around. Betsy also got home from Maine on Sunday so we have a full house again!! But not for long so we're enjoying it while it lasts. I will post more pictures of Owen "the stud" Maxfield later. 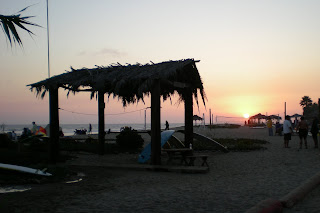 Our trip to California was a blast. Here are some pictures of our favorite surf spot. 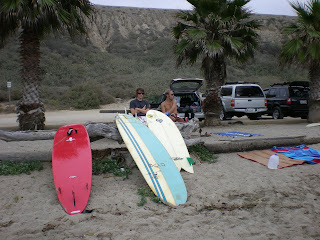 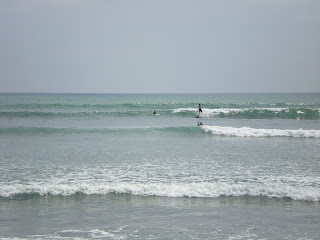 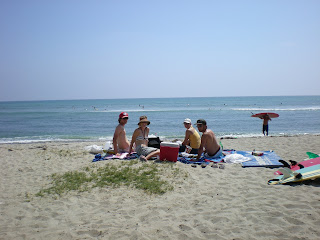 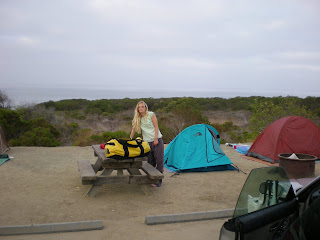 This is what we called our "Anniversary Inn". This camp site is where we spent our 2 year Anniversary. It did have a sweet ocean view, but about 50 yards away were some train tracks and then the Highway weighing station. So every semi that passed had to stop there. It was so loud, we laughed so hard when we saw the spot. Luckily we were all so tired we got some sleep anyway!

We are so happy, Ty is finally all done with the bar. He took the 3 day, 18 hour test two weeks ago. I am so proud of him! He studied his heart out all summer, we don't find out if (when) we passed until the middle of November- so I'll let you all know when we hear the good news. We went on a surfing trip to California with Nanette and Jared this week to celebrate, it was a blast. I will post some pictures later today.

Posted by Tyler and Emily at 9:53 AM 2 comments