skip to main | skip to sidebar

Fun in the sun!

We've had some beautiful weather in London the last few weeks so I've spent a lot of time at this paddling pool in the Heath with the boys I nanny. It's such a perfect pool for kids because it never gets deeper than about knee-length. 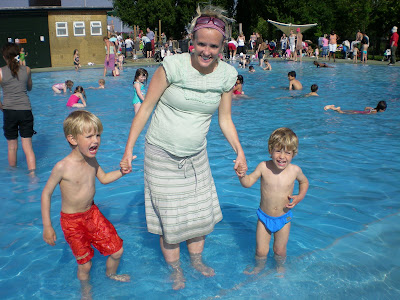 I really love these boys like family. I have so much fun with them. They are so excited and curious about the baby in my tummy. A couple of times a day Theo, the younger one, will just stop what he's doing and come over and rub my tummy and say, "Hi baby Theo" (he thinks I should name him Theo). Alex, on the other hand, thinks the baby is boring and just asks me why the baby never comes out so he can see him 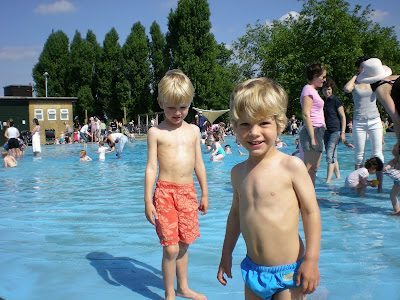 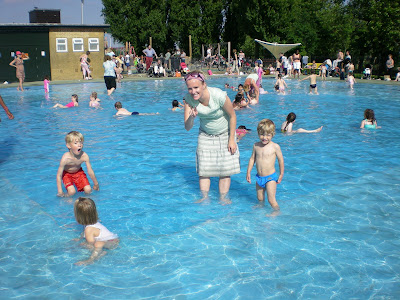 Theo being a sea turtle. He walked around the whole pool like this for almost an hour. If I'd call his name, he'd yell back to me, "I'm not Theo, I'm a sea turtle". 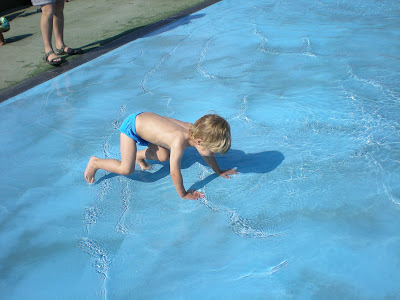 A lot of posts this week- I've been trying to get all caught up because we're moving (in the same area, just to a place where we can actually fit a crib) and won't have the internet for awhile...it took 2 months to set up the first time, so hopefully it doesn't take that long again!

COLDPLAY!! Thanks to Karen and Bryce, we entered a contest to win tickets and we won!! Well, actually, I won, but I decided to take Ty as my date. The concert was in Brixton and was such a blast. The babe and the belly really came through for us a few times- one look at my belly, and a security guard ushered us right inside- avoiding a huge line to get in . And then another crowd control worker led us right to disabled seating where we had a great unobstructed view. I don't think I ever could've lasted standing the whole concert. 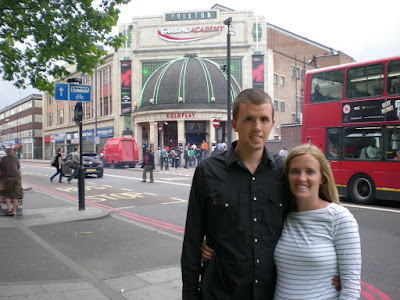 Our little man loves Coldplay. It was so amazing- as soon as the first song started, he started kicking like crazy, I think he was definitely feeling the vibration from the music- it was pretty loud. 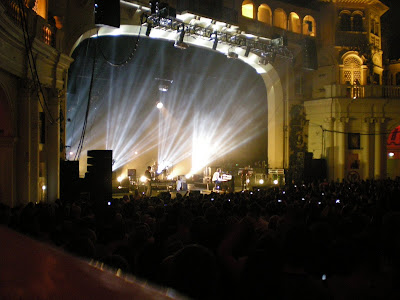 During one of the last songs, "Yellow", Ty was behind me and he put his hands on my tummy, and as soon as he did, the babe started kicking him. I actually got a little emotional, we were all dancing together- our first 'family moment'. 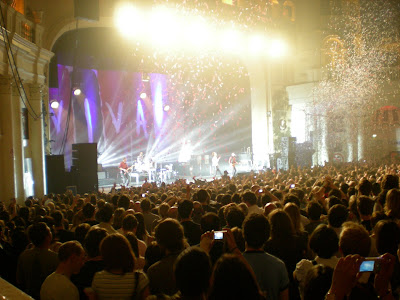 Chris Martin is an incredible performer. The video we took doesn't do him justice. He's like a little kid that can't hold still. He was jumping up and down, dancing all over the stage and rolling on the ground during every song.

On Saturday we went with the Thueson's to the Trooping the Colour, which is the annual Queen's birthday parade. It was so fun to see the Queen!! That is her in the green in the carriage. Thanks for the picture Kevin and Jill! (I was a little slow with the camera and all you can see of the Queen is a blurry green figure) 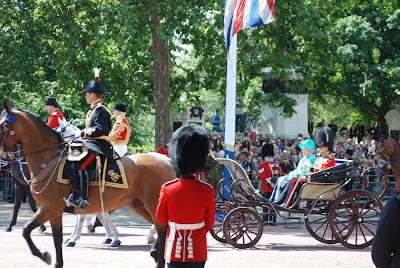 At the Royal Courts of Justice where the barristers still wear the old wigs. Too bad Ty doesn't do litigation, I think he'd look great with long white curls. 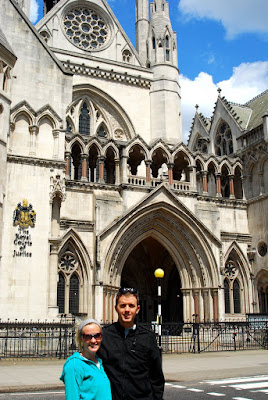 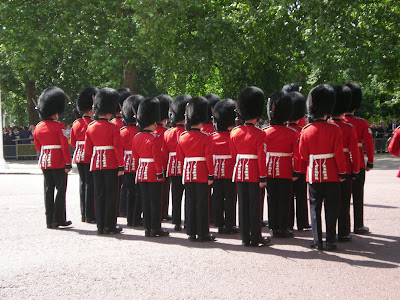 Jill and I waiting anxiously for the Queen 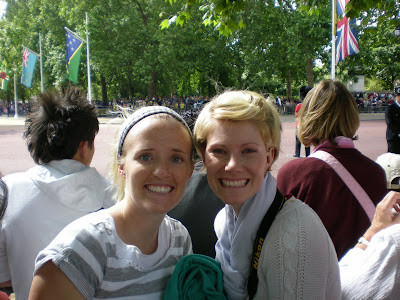 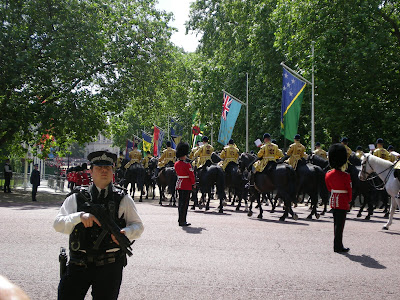 Posted by Tyler and Emily at 3:06 AM 4 comments

My parents celebrated their 29th wedding anniversary yesterday!! They've been in love since the 7th grade and are still going strong. 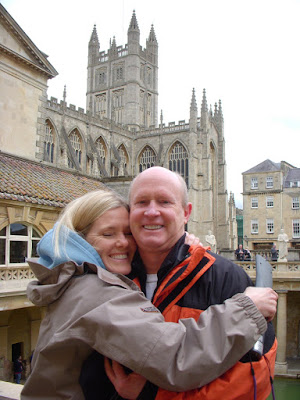 Happy Anniversary!! We love you! 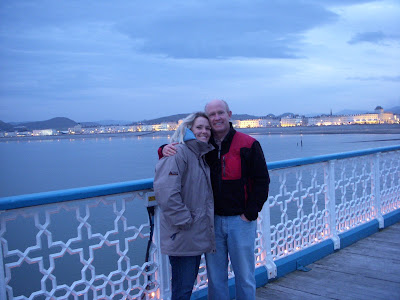 And speaking of celebrating...my ward gave me a baby shower this week!! Thanks to everyone who came and helped put it together, it was so much fun. I'm so mad, I had my camera in my bag but never got it out...so no pictures. But we got some really cute outfits (that I still have laid out on my couch because I love walking past them and imagining our our baby wearing them) and some awesome books. I really should take some pictures of the cute things we got and post them. During the shower, everyone wrote down some advice and then read it out. My favorite piece of advice is to have Tyler wake up in the night and change the babe's diaper before I feed him. He was thrilled about that one.

While everyone was giving their advice it kind of hit me for the first time that I'm not just going to be pregnant forever but that I'm actually going to have a baby to take care of. And the distinct words came to mind "Oh crap...I have no idea what I'm doing." Then that night we watched "Juno" which we loved (thanks Jill) and I cried during the most random parts of the movie- especially during the giving birth scene...am I really going to do that?

Last weekend we got cheap flights to Spain. It was a blast. The trip started off with a bang when we arrived at our hostel in the pouring rain and the doors were locked with no lights on at all. Someone eventually showed up to let us in...apparently they don't let anything stop their afternoon siestas.

We went to Pamplona, the city where they do the running of the bulls. I can't believe people really do this. 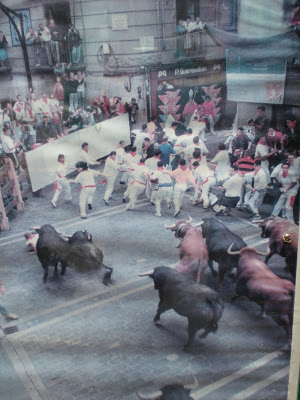 Training on the street where the bulls run for next month when I come and do it 7 months pregnant. 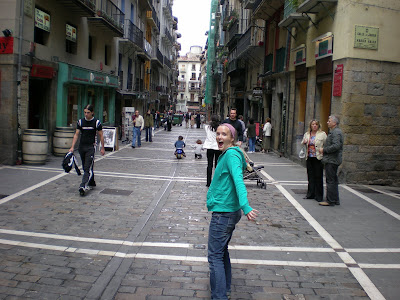 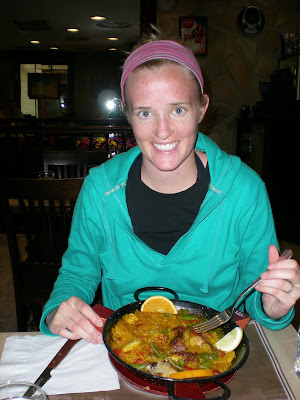 San Sebastian, the city on the northern coast where we stayed 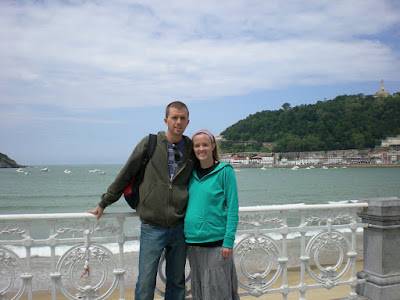 The Guggenheim Museum in Bilbao 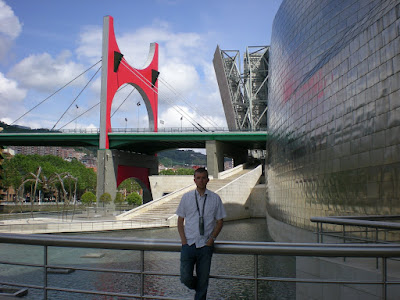 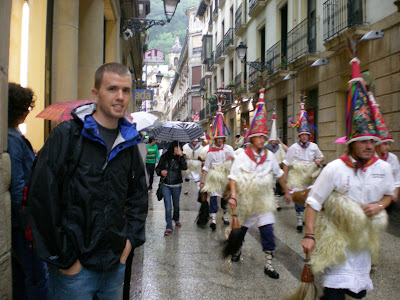 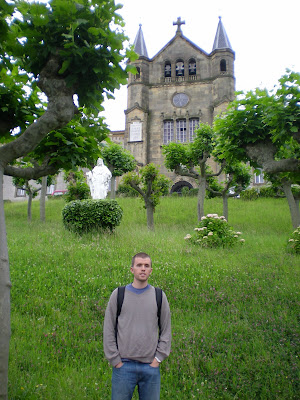 Ty at a Spanish Tapas Bar 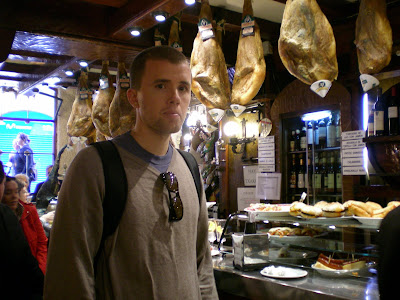 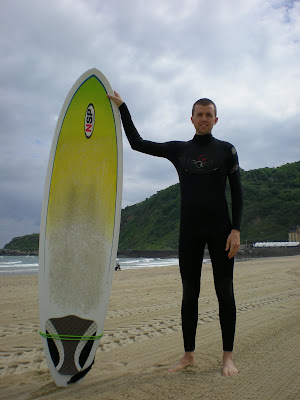 ...Not surfing in San Sebastian 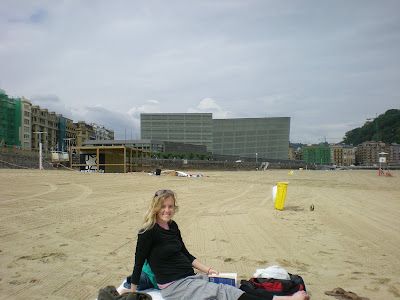 Off for a productive day of work...

Tyler had to leave early for work this morning to go to some meeting. As I was eating breakfast, he walked into the kitchen and took a pill. His allergies have been horrible lately with the hot weather we've had here. I asked him what it was and where he found it. He said he just found a single pill in our medicine box that said Benadryl. I said, "wait, what did it look like?!?". He said green and I just started laughing. I went in and got the 2 boxes we have of benadryl- one that says in big bold letters non drowsy and the other that is a box with a little moon and stars on it. Well, the single green pill that he randomly found and swallowed without further research had fallen out of the night time box. I couldn't stop laughing as he walked out the door. I hope he makes it through the meeting...and the whole day! At least I don't have to worry about him driving anywhere!

Posted by Tyler and Emily at 1:04 AM 5 comments

My friend, the genius.

Congratulations to Nanette for getting accepted to the U of U Law School!! She basically took the LSAT for fun and just applied to the U to keep her options open and of course she got accepted. She hasn't decided if she'll go yet, but it's such an accomplishment to get in. I think she may be telling the U, as Derek Zoolander would say, "she's complimented....but not interested"- for this year at least. We will see! 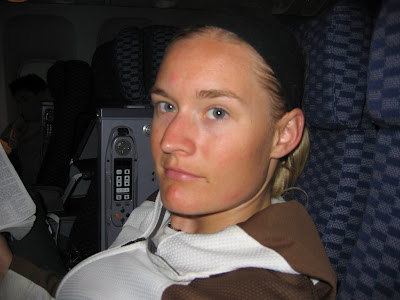 It was always fun growing up with a genius like Nanette. Especially around the time when ACT scores came out. To avoid telling my own scores, I always mentioned the fact that she got a perfect score on the reading section. I will never forget Nanette reading a book in the cafeteria during lunch and at recess in elementary school. And everywhere we've traveled together, we always would try to pack as light as possible, but somehow each time she finished a book- in record timing, she would pull another one she brought out of her pack. I think she can read faster than anyone I know.

Congrats Nanette, I'm so proud of you!